Key Signature and The Circle of 4th/5ths

Key Signatures and The Circle of 4th/5th

Where key signatures come from.

Key Signatures come from those altered notes from major scales. Any time you alter a note by making it a sharp or a flat according to the major scale formula; that alteration is placed next to the clef and called a key signature.

The Circle of 4th/5th

Figure : The Circle of 4th/5th 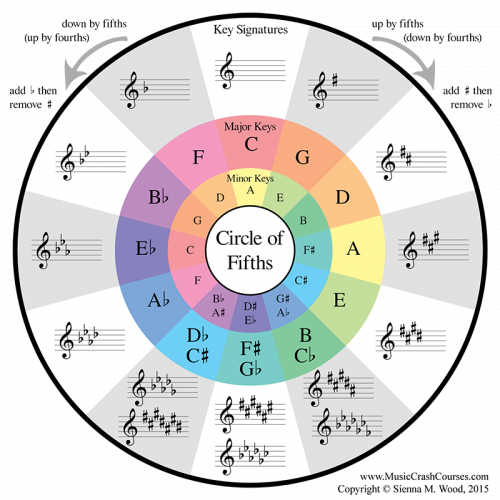 Shortcut to figuring out scales

The name of the key is the same as the name of the scale. For Example, if the scale you chose is Ab, look at how many flats or sharps the key of Ab has; in this case it has 4 flats. In this example, you must start with an Ab and end the scale with an Ab eight notes higher or lower than the one you began with. Look at the mnemonic for the flats: Battle Ends And Down Goes Charles Father. What are the 1st 4 words?: Battle, Ends, And, Down. This means that the key of Ab major has four flats and the flats are in order: Bb, Eb, Ab, Db. The scale has to start with Ab and end with Ab. So the scale in order would be: Ab, Bb, C, Db, Eb, F, G, Ab